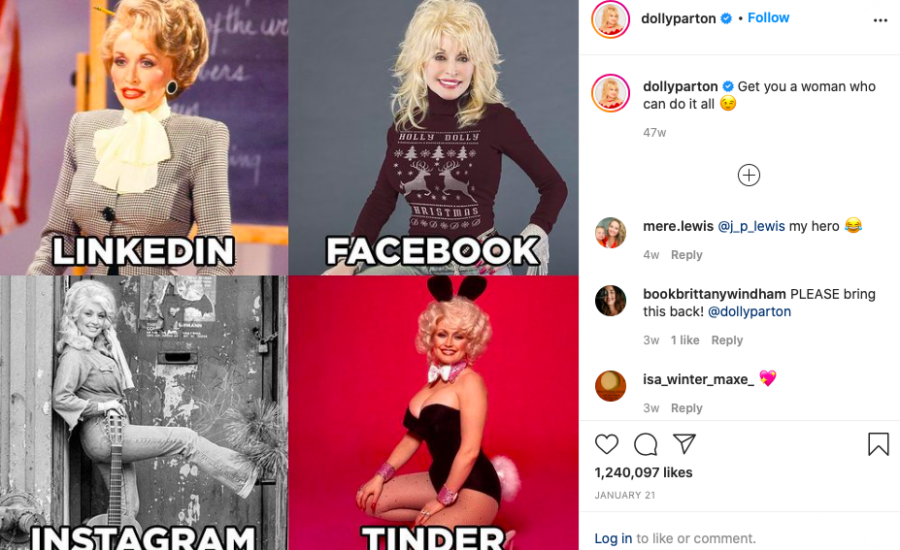 2020 brought a lot of unpredictability and a global pandemic to the table, but it also provided us with the funniest memes. As much as the year looked absolutely bleak for many, we used meme culture to cope with our underlying confusion and crippling mental states. Pop culture and clever internet language spawned much needed tears of happiness amid tears of sadness. The most relatable, random, and best wireless memes took over 2020. From the resurrection of a beloved Twilight celebrity to a lyrical guide in proper hand washing, let’s partake in some final hearty meme-related chuckles to cap off this incredibly somber year.

The Most Relatable Funniest Memes

At the very beginning of the year, when we were all still hopeful that this year was going to be our best year yet, the legendary Dolly Parton posted a four-panel image showing four different versions of herself to match their most appropriate social media platform. This soon became the #DollyPartonChallenge where many social media enthusiasts began creating their own variations of one of the funniest memes of 2020. Tinder Dolly Parton, we’re begging you to please not take our man.

Let’s be honest, at the beginning of quarantine Tiger King was the most binge-worthy phenomena we all sank our tiger teeth into. Naturally, the funniest memes surrounding the Netflix series grew like a good old mullet. The above Twitter meme has the cross-referencing power of alluding to both the show and the rise of Zoom meetings. It’s funny when those things happen.

Among staying at home for basically all of the year, meme creators had a little too much time on our hands. Enough time in fact to create personalized first name relatable memes for Instagram that made you feel honored when your identity was boiled down to an image of a particular frog, or sandwich, or cursed image. These accounts were wildly popular among friend groups for sharable content and just made people feel special in a time when we were all so lost ⭐

Prior to 2020, we all thought Zoom was a sound best reserved for speed racers. Now, we all want our Zoom calls to be as speedy as possible. The funniest memes about video calls were all the buzz as they tapped into our innermost thoughts when facing the dreaded virtual meeting of the day.

How it Started Vs. How it’s Going

Of course, the pandemic is no joke. However, the funniest meme creations that grew on the internet because of it are absolutely hilarious. “How it Started Vs. How it’s Going” details the fine art of visual storytelling from past to present. Without saying too much in so many words, these relatable memes began outlining the beginning of the end through clever reference photos and current events. You could say we started from the top… now we’re here.

Washing our hands the proper way had to be one of the most rewarding and prideful highlights of 2020. The CDC recommends washing your hands for at least 20 seconds, or just as long as it takes to sing “Happy Birthday” twice. But singing “Happy Birthday” when it’s not anyone’s birthday is just not appropriate, so a 17-year old by the name of William Gibson started a website called Wash Your Lyrics which generated a hand washing poster with lyrics to any song you choose. Then, the #WashYourLyrics meme trend blew up. Artists like Miley Cyrus and Blink-182 created their own handy lyrical versions, while other social media users spun hand washing mixes of Carly Rae Jepsen and Queen tracks. Lathering up lyrics while staying germ-free never sounded so great!

The Most Random Funniest Memes

Can you believe that the above post is the original from 2017 that started this insanely bizarre meme trend in 2020?? That post deserves a Nobel Prize. “Tracksuit Robert Pattinson Standing in a Kitchen” is actually just Robert Pattinson in a behind the scenes shot from the movie Good Time, but became a viral reaction image macro meme this year. A flawless example of how it’s done? Look below.

Perhaps the most iconic audio bit from 2020 had to be the mysterious “Mi pan, zu zu zu, zu zu zu / Mi pan, yakakus, ñam ñam ñam” from a CGI Llama that took TikTok videos by storm. Even if we had no idea what the hell this jingle meant, we all ate up the random funniest memes that came from it- one “Mi pan” at a time.

The absolute best morning vibe of 2020 came from this chill TikTok video meme from Nathan Apodaca (@420doggface208) vibing to “Dreams” on a skateboard while gulping some refreshing Ocean Spray Cran-Raspberry. This TikTok went viral with 72 million views and counting and has inspired social media users everywhere to shoot their own shots at recreating it.

“The Earth is Healing. We Are The Virus.”

Due to images of elephants and dolphins spreading on social media this year, people falsely claimed that animals had returned to big cities. This incited the now-deleted tweet “Coronavirus is the Earth’s vaccine. We’re the virus”. This message was regarded as misinformation as it minimized the loss of human lives over the apparent restoration of our environment. However, this didn’t stop social media users from creating their own humorous take on how the Earth is allegedly healed. One thing we know for sure, the most random funniest memes are always found on Earth.

As untrue and just frankly rude as this video is, we can’t deny it’s an iconically random meme that came from piercing eyed Jordan Scott on TikTok. This video soundbite ended up becoming a bait-and-switch meme, eventually used in wildly different scenarios with the same punchline: “I ain’t never seen two pretty best friends. It’s always one of them gotta be ugly”. Those these words left his lips, Jordan Scott claims “all women are queens regardless”. And that’s on feminism in 2020.

We have to toot our own horn too. Enjoy these best wireless Wing memes that explain common cell phone related issues in familiar images:

Cheers to more memes to look forward to in 2021!